NOTTS SENIOR CUP 2nd ROUND PREVIEW - THE BULLS Vs THE WOOD 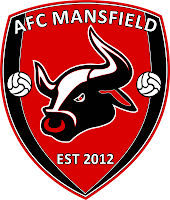 There have been 4 previous meetings between the two sides, all in the CML and all resulting in victories for AFC Mansfield.
The 1st ever meeting on Wednesday 5th September 2012 boasted a bumper crowd of 340 and a resounding 9-0 win for The Bulls.  Goal-scorers that night were Dean Rick and Carl Haslam with hat-trick’s, Mark Carter with a brace and a goal from Joe Meehan.
The return fixture at Debdale Lane produced more goals.  Mark Carter with a hat-trick, Carl Haslam with 2 and Dean Rick completing the scoring.  The most memorable part of the day was the now ’infamous’ miss from Haslam that has become a YouTube classic.  Another healthy crowd of 145 saw that and over 100,000 have seen the miss.
The 2013/14 season  brought 2 closer games.  On Saturday 26th October 2013 The Bulls won 4-3 in a keenly contested game.  Dave Bullock put Sherwood ahead after just 6 minutes.  Dean Rick and Danny Naylor put AFC in front before Brad Straw brought the teams level on 34 minutes.  Mark Carter restored the lead for AFC just before the break.
Plucky Sherwood were level again five minutes into the restart, Brendan Williams the scorer.  Mark Carter gave The Bulls all the points with his 2nd on 64 minutes.  105 spectators saw a very good game.
The last meeting between the two clubs came on 14th December 2013 at Debdale Lane.  AFC Mansfield won this 3-0 with a brace from Callum Green and a strike from Sam Holmes.  All 3 goals came in the 2nd half and this game was watched by a paltry 43 people.
Both clubs have vastly changed personnel coming into this game with several ex Bulls now playing for Sherwood.  It will be an intriguing affair and a game definitely worth watching.