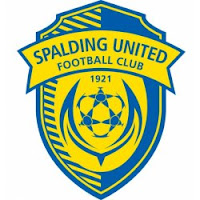 The Bulls will make the trip to Spalding on Tuesday evening for their first away game as a step 4 club.  After the great result on Saturday against Pickering Town we are currently 7th in the table and we travel with great confidence.

This is the first meeting between the two clubs at any level.  It could be said that the Bulls are travelling a little into the unknown at this point in the season.  Spalding United started the season with a 1 all draw at Cleethorpes on Saturday in front of a bumper crowd of 425.  Reading the comments from Spalding they were very happy with this.  Their goal being scored in the 32nd Minute by Zuerner.  They currently sit 11th in the table.

One Bulls player will be making his return to his former club in Brad Wells, who scored 30 goals for them in reaching the playoffs two seasons ago.

Spalding United FC are nicknamed ‘The Tulips’ because of the town’s association with the bulb growing industry. The club was formed in 1921 but the town did have football in the guise of Spalding Thursday and Spalding Town prior to that. They have always played at the same Sir Halley Stewart Field venue, although it was originally known as the Black Swan Field.

Spalding play in all Blue and therefore it will be a first outing for the Bulls brand new away strip of all Yellow for the new season.

The Bulls will welcome back into the matchday squad Jason White and Kieron Wells.  The only doubt following Saturday's game could be Jack Steers after he was substituted following the penalty incident.  The only other absentee from the squad will be Phil Buxton.

Let's hope for a great performance and another 3 points to show all in the league that we mean business.

Get yourselves down to Lincolnshire to support the Bulls on Tuesday night as we warm up for the local derby in the FA Cup to follow on Saturday.
Posted by AFC Mansfield at 8:00:00 pm