In what was a dominant performance at the Forest Town Arena, AFC Mansfield overcame Garforth Town 3-1 in the NCEL Premier Division. It could have been more for the Bulls had it not been for some unlucky, and at times, wasteful finishing.
Matty Plummer, returning to the starting line-up after a hamstring injury, marked his return with a goal in the 11th minute. The centre-half for the evening converted a corner from Connor Smythe to get Rudy Funk’s side off to the perfect start.
Chances came thick and fast in the first-half but the home side failed to add to their one-nil scoreline. Hitting the post as well as some outstanding goalkeeping from Lawrie meant Garforth only trailed by a single goal at the interval.
The visitors then drew level on 52 minutes courtesy of a wonder strike from substitute Mark Simpson. A stunning effort from outside the area found its way into the top corner, leaving Jason White helpless.
The Bulls would have thought they were to rue missed chances yet again – had it not been for Nick Guest and Ollie Fearon. The former put the hosts back in front on 54 minutes, before the latter dispatched his 24th goal of the season just two minutes later.
Two goals in as many minutes for AFC Mansfield allowed them to see the game out with relative ease; and clinch three points for the first time since last month. 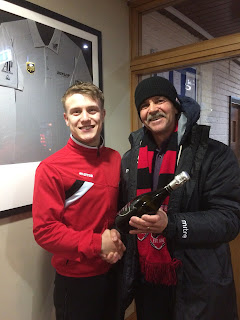